Administration Unit is a Unit in Registrar’s Department. It is responsible for Registry Department Staff Nominal Roll, Procurement and Junior Staff Matters including Promotions, Discipline, and Postings/Deployment.

It is the Secretariat of the Senate Ceremonials Committee.

The Head of the Unit is usually appointed by the Registrar to serve as Secretary to Senate Ceremonials Committee.

The Unit as the Secretariat of the Senate Ceremonial Committee is involved in the following activities:

Other Functions of the Unit are as follows:

(i)      Junior Staff Appraisal of other department

Appraisals of Staff are done yearly, the head of unit represents the Registrar in the appraisal meeting and report back to the Registrar on the decision of the Committee

The head of the Unit represents the Registrar in a any Disciplinary Committee set up by the University authority on any misconduct of Junior staff of other department and report to the Registrar the outcome of such committee.

It is the responsibility of the Administration Unit to order for new University Academic Regalia on the approval and directive of the Vice Chancellor and the Registrar respectively.

Administration Unit also orders for ceremonials robes for the Chancellor, Pro-Chancellor, Vice-Chancellor, Registrar as well as for recipients of our University Honorary degrees.

It has been the responsibility of the Administration Unit to produce the Monthly Nominal Roll of members of staff in the Registry which are submitted to the Bursary and Academic Planning Unit of the Vice chancellor’s Office.

The Monthly Nominal Roll are signed by all members of staff of the Registry and forwarded to the Bursar and the Director, Academic Planning Unit not later than the 7th day of every month. The secretariat staff update the list every month taking note of staff retirements, transfers, promotion etc.

The Unit is charged with the responsibility of collecting all University mails daily from the Campus Post Office and sorting such mails into individual, departmental and students’ hostel mail boxes.

The Unit is the custodian of University office keys which are kept at the Administration Portals Lodge. The keys are issued to staff of various Faculties/Departments/Units etc in the morning and are collected back from the users after working hours.

Keys are also issued to staff who are on special duties during weekends. During emergencies, holidays and weekends, staff of the Administration Unit are contacted on phone to issue keys to staff that needed them.

The Administration Unit prepares Call Circular for budget estimate of the Registrar’s Department annually at the request of the University Bursar.

PROFILE OF THE HEAD OF UNIT 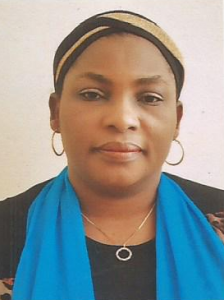 Basirat Olubukonla Abiola Saddiq is a Senior Assistant Registrar in University of Nigeria, Nsukka. She has over 13 years’ experience as a University Administrator.

She is married and blessed with four lovely children.

LIST OF STAFF IN ADMINISTRATION UNIT, REGISTRY DEPARTMENT WITH STATUS AND QUALIFICATIONS