The Senate of the University of Nigeria is the chief policy-making and administrative body on academic matters. The general function of Senate is to organize and control teaching in the University. Senate also controls admissions to postgraduate studies, discipline of students, promotion of research, and award of degrees and other qualifications.

Senate Affairs Unit is the Secretariat of the University Senate and three other Standing Committees of Senate, namely: Committee of Deans and Directors, Senate Development Committee and Business Committee of Senate. Senate Affairs is responsible for processing, documentation, storage and retrieval of documents of these bodies. 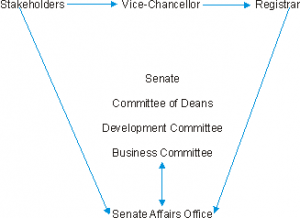 The figure above illustrates that when an issue arises from any stakeholder, the matter is sent to the Vice-Chancellor, who takes necessary action by endorsing it to the Registrar. The Registrar in turn minutes it to the Head of Senate Affairs Unit for necessary action. Senate Affairs will take action as directed and then forwards the document to the relevant body (i.e. Senate or any of the above listed Committees) for consideration.

When the matter has been dealt with by the relevant body, it gets back to the Registrar (Senate Affairs Unit) for disposal action. Senate Affairs will then communicate the stakeholders on decisions/actions taken on the matter. Thereafter, it stores the information in both hard and soft copies for future reference. 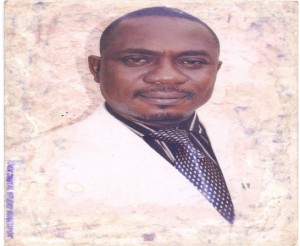 Nelson was born at Aku in Igbo-Etiti L.G.A. of Enugu State on the 3rd day of November 1968. He attended his primary education at Ogbete River Primary School, Enugu, and obtained his West African School Certificate from Boys’ Secondary School, Aku.

Nelson has worked in different Units of the Registry Department between 2008 and 2020, in various capacities. He belonged to different Professional Associations, and has attended different conferences for personal human development. He has served in not less than twenty (25) committees in the University.

He is happily married with children.

Other Members of Staff